The Carnival includes a wide range of very old aged customs.Most of carnival events often are in reference to ancient ceremonies and meant to help for “happy year” and a “good farm/agricultural produce”.

In carnival days everything in overturned.Men become to women and vise versa, the poor become rich, old women behave like beeing in confimement-having recently given birth- etc.Seriousness/ solemnity is replaced by jests and jokes.Each place is living the days of Carnival in its own way.

The celebrations of carnival begin with the “entry of Triodio”(=the three week period precending the first Sunday of Lent).
The first week called “ Profoni ” ( because a village crier (cry=fonazo) proclaimed the coming of Carnival ( =Apokria ).
This week in many homes used to slaughter pigs to have meat for the next week “Creatini” (meat=creas).
After " Creatini",the next week named “ Tyrini ” week (cheese=tyri) where abstain from meat and eat only milk products. In earlier years this week was called as“Makaronou ” (Makaroni=spachetti) because housewifes used to make handmade pasta . On Pancake Day (= Tsiknopempti ) it's a tradition in every house to scorch (=tsiknizo = to burn the meat on coal fire) and every housewife make traditional cheese pies.
As “ Triodio” starts- and every day till Quinquagesima (Sunday)- , residents wearing masks and in funcy dress were walking up and down, wandering through the streets and squares of the village . In the evenings  they masqueraded- covering their faces- and going round to friendly and neighbour houses for “Veggeras” ( so called that evening parties).
After the “recognition” and the mask throwing off, they feasted-entertained their friends almost every evening. In Kardamyla, in addition to the feast of  “ eat and dance and carnival songs ”, features of these carnival days are the “antidiavasmata”
( read=diavazo ) which were quatrains by which one mind to another. The quatrains could be praises and satirical banter.

In Kardamyla and the nearby villages, the zenith/peak of feast was on Sunday. All masquerated and funcy dressed satirized various events and villagers, without any misunderstanding.
The groups ended up in the village's square where dance  begun and kept in until the next day.Besides “detos” and “ walking ” dance , is in use and a special famous dance of these days :the "ground" pepper ( that rubbed pepper ).

Carnival dances are: " detos" (tie=deno) or "siganos" ( slowly=siga) or "perpatitos" (walk=perpato). It's a smooth and simple dance ( like walking ) and that's why this dance named so. The dancers are caught each other with  cross handle as if tied- hence "detos"- while singing and dancing.
The most sweet-voiced began singing a verse (line of  lyrics) and the others repeated the same lyrics. Songs were about love,pain,death,sea, foreing land (relatives abroad), wedding etc.

The food and the party (happenings-celebration) continued until Shrove Monday .
These days take place the customs of “Makarona” [=the one who loves spaghetti/ the spaghetti eater (spaghetti= makaronia)] and “ Agha ” (coming from foreign( Turk )occupation) .
The customs of " Makarona" take place in the villages of Amades, Viki, Kambia and Pityos while " Agha"  custom in Pityos, in Mesta and Olympi takes place even today.
The women were busy cleaning the dishes- so not to leave traces of fat in it- and be clean at Lent. In the upper section of Kardamyla women were taking cooking untensils and lenten food and were going to the river. When finished cleaning untensils, rinsed out their mouths with water saying “water and salt” meaning that they had to forget all they had said each other during carnival. Men also threw water behind them for the same reason. In Quinquagesima (Sunday) evening , they're giving their children to eat an egg. So they were "closing" their childrens mouth with this egg and "re-open" it with the " Easter egg".

In Amades, Viki and Kambia villages, no carnival customs remain alive nowadays.
In Pityos continues the customs of  “Agha” and “ Makarona”  while mainly in upper Kardamila and less in Marmaro, the parties are ongoing but they have limited only in the evenings.
The organization of the carnival feast day- the last Sunday of Carnival- is under the aegis of (sponsored by) the Municipality of Kardamila and the local Cultural Association which present various events in the square of Ano Kardamila in recent years. 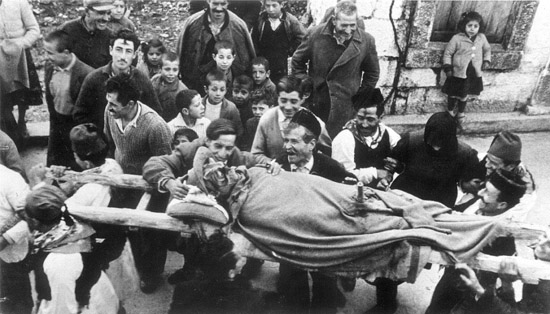